The United Sorghum Checkoff Program has been working to develop value-added export markets around the world, including in Vietnam.

Ten years ago, trading U.S. sorghum to China was just an idea. Today, China pulls the majority of sorghum exports at a premium to other feedgrains.

Why is that? What factors interplayed to foster the emergence of a powerhouse market in the world’s most populous country? And who is thinking about the next big thing for international sorghum markets?

The United Sorghum Checkoff Program and the U.S. Grains Council (USGC)—that’s who. When the idea was born for a sorghum market in China, the Sorghum Checkoff was just getting out of the starting gate with a huge mandate: leverage every checkoff dollar to create value for the producer. Observation in 2010 pointed toward China as a potential market, so together with the USGC, leadership at the Sorghum Checkoff conducted a market assessment, fostered relationships with Chinese buyers, educated buyers and end-users, and launched sorghum into a completely new market.

Today, the Sorghum Checkoff is doing the same type of work with an eye toward creating value-added export markets around the world. 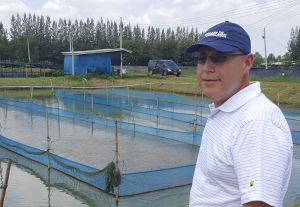 Pangasius is a species of Vietnamese catfish that is sold domestically and around the world. Local diets for pangasius traditionally consist of ingredients such as fishmeal, rice byproduct and a root plant called cassava. This light colored starch plant was a good ingredient that allowed the fish to express a preferred white filet. However, in 2017, demand from China and the domestic ethanol industry made cassava very hard to come by.

Other ingredients such as corn were introduced to fill in for cassava. Yet, fears of yellow discoloration caused by the xanthophyll in corn soon removed corn as a viable alternative.

“That got us thinking,” said Manuel Sanchez, Regional Director of Southeast Asia for the USGC. “We thought sorghum could be a great way we could combat this specific [yellowing] problem. Out of that, we began discussions with Sorghum Checkoff. We knew there was an opportunity, but we didn’t have the data on aquaculture. So, we decided that we would conduct the trial ourselves.”

After the Sorghum Checkoff funded a joint program with the USGC, sorghum was shipped into Vietnam on a scientific basis.

“We partnered with a local catfish producer in Vietnam,” Sanchez said. “The trial was specifically to showcase that we could feed sorghum without affecting filet color. We are positioning sorghum as a potential alternative to cassava.”

In the trial, Pangasius were fed a ration including sorghum in comparison to similar diets including cassava and corn. The outcomes when using sorghum were as effective as the competing ration ingredients, and the study concluded that sorghum could be fed up to 20 percent in Pangasius rations with no yellowing or other adverse effects.

Armed with that information, USGC and the Sorghum Checkoff pressed forward with opening a pathway for trading sorghum into Vietnam. Vietnam requires a pest risk assessment on U.S. sorghum before it can be imported. According to USDA, the assessment, overseen by USDA’s Animal and Plant Health Inspection Service (APHIS) is an analysis of the plant pests and diseases known to be associated with the commodity in the country of origin.

“For the past three years, our focus has been on how to position sorghum for the largest compound feed market in Vietnam,” Sanchez said. “The catfish trial was there to prepare the Vietnam industry to be aware of sorghum.

“The study was well received in Vietnam, but the problem was they couldn’t import it. It pulls a shadow over the work we have done if the customer cannot bring it in.”

Enter National Sorghum Producers, the policy arm of the sorghum industry. NSP worked closely with APHIS for almost a year to ensure the process moved forward at a steady pace, while the Checkoff provided analysis and information to APHIS officials.

“The Association is working with APHIS and with multiple government officials in the U.S. and Vietnam to make sure we don’t get lost in the shuffle,” said NSP CEO Tim Lust. “At times, there may be only a few hot issues in the international trade arena. Right now though, there are so many complex trade policies at play that you have to constantly engage to push your items across the finish line.”

The industry expects an announcement from APHIS this spring regarding the pest risk assessment for Vietnam.

What does that mean for moving sorghum into the Vietnam aquaculture market?

Vietnam does have an import tariff for feed ingredients, but they are still a net importer of coarse grains and co-products. The pest risk assessment gives sorghum a trade pathway into a new market and a seat at the table as Vietnamese producers determine how best to meet their feeding needs.

And aquaculture is just the beginning. While the new research on Pangasius can raise awareness about sorghum, there is likely space in other markets. Vietnam is currently the fifth largest corn importer in the world, and the pest risk assessment will give sorghum a chance to compete in that market.

Markets Around the World

The Sorghum Checkoff, in partnership with the USGC, is looking into other international trade opportunities, as well.

One particularly promising market is India. With population growth set to eclipse China for the world’s most populous country in the next two to four years, India will need more and more of the world’s feedgrains.

Reece Cannady is Manager of Global Trade for the USGC. He said India has a high tariff on imports of U.S. sorghum – 50 percent, in fact – but the industry can work to overcome that barrier in deference to the nation’s rising demand.

“They have a [feed] deficit today, and they have a very strict non-GMO market,” Cannady said. “Sorghum is a non-GMO product that they can use.

“We have great logistics and all the things a U.S. supply chain provides,” Cannady said. “The next step is working with policymakers and associations in India to get that tariff removed, at least for a specific quantity.”
The Sorghum Checkoff is in early conversations with the USGC and contacts within India to launch a market assessment, similar to the one opened in China in 2010.

Does that mean three years from now most of your sorghum will go to Vietnam or India?

“Not necessarily,” Lopez said. “But what we are trying to do is provide competition. We are constantly looking for other marketplaces that will put a premium value on it.

This story originally appeared in the Spring 2020 Issue of Sorghum Grower magazine in the features department.

China is Back: Sorghum Farmers Have Regained Access to the Vital Chinese Market