China is Back: Sorghum Farmers Have Regained Access to the Vital Chinese Market

After a long-fought battle, sorghum has once again gained access to a major export market in China.

After more than two years of economic storm clouds hanging over your industry due to the trade war with China, you’re now selling sorghum to the Asian giant once again. From duck feeders, to dairies, to baijiu producers, the engines of China’s agricultural economy are once again humming along on U.S. sorghum.

U.S. agriculture overwhelmingly voted for sweeping overhauls of global trading systems when it played a key role helping elect Donald J. Trump president in 2016. And in the throes of a trade war with their largest export partner, farmers largely stuck with President Trump, believing relationships with U.S. trading partners could be even better. Today, sorghum farmers are finally being rewarded for their persistence as sorghum is moving out and basis is moving up.

In late 2017, National Sorghum Producers staff began monitoring discussions between U.S. and Chinese officials. At the time, U.S. sorghum farmers were selling approximately half their crop to China and total exports were coming off historically strong levels, so the prospect of a trade war was unsettling—even if it was largely expected. The situation quickly deteriorated, and in response to U.S. tariffs on Chinese steel and aluminum products, the Chinese Ministry of Foreign Commerce self-initiated two investigations into imports of U.S. sorghum. Export volumes and basis across the country both crashed in spectacular fashion (see Figures 1 and 2). 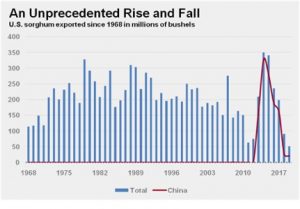 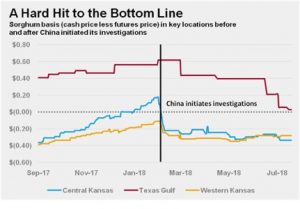 After a seemingly endless number of false starts over what felt like an eternity, the U.S. and China finally reached an agreement on January 15. President Trump and Chinese Vice Premier Liu He held a signing ceremony (attended by National Sorghum Producers Chairman Dan Atkisson of Stockton, Kansas) at the White House and the Phase One deal went into effect on February 14.

Understandably, neither U.S. nor Chinese officials wished to send signals which might distort planting or other market decisions, so we were left to speculate on the deal’s exact provisions. However, based on history, we believed the volumes could be highly significant for sorghum farmers. The deal required China to purchase an additional $32 billion in agricultural goods over the 2020-2021 period relative to the 2017 baseline. Given U.S. exports to China that year totaled $19.5 billion, this increase—if realized—would represent 64 percent growth over two years. Though this may seem like an impossibly lofty goal, Chinese agricultural imports peaked at $120 billion in 2018, so we believe it to be imminently achievable.

The news was just as good for the sorghum industry as it was for U.S. agriculture overall. In the 2017 baseline year, U.S. farmers exported 181 million bushels of sorghum worth $838 million to China. Given 110 million of the 358 million bushels produced in 2019 are projected to be exported, sorghum basis will need to appreciate considerably if production volumes are to increase enough to meet the additional demand associated with the Phase One deal (assuming the increase in exports of sorghum relative to the baseline is similar to the increase in exports of all U.S. agricultural goods).

While we still don’t know exactly how many bushels of U.S. sorghum China intends to purchase, we are hearing a large amount of positive information from merchandisers and seeing highly positive market movements. While anecdotal information in the absence of data should be treated skeptically, it is hard to ignore increased export purchase commitments and basis appreciation. Today, we have both—in spades. 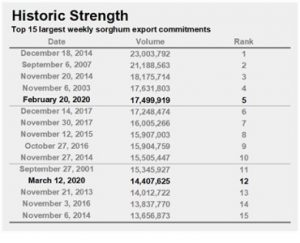 With this abrupt increase in purchases, basis has already appreciated significantly (see Figure 4), and we expect this movement to continue as long as commitments continue. Today, most of the appreciation is concentrated around export terminals (where the price of sorghum is now 119 percent of the price of corn for the first time in several years), but if the purchase trend holds, appreciation will likely spread across the country. This change is striking on its own, but given the pace of commitments and basis gains even in the face of COVID-19 concerns is an extremely positive indication of the depth of demand for U.S. feed grains in China. 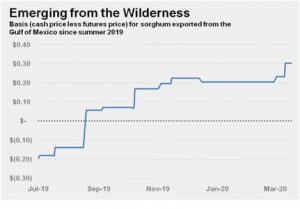 With so much demand from China, the next few years will be interesting. However, it will be important for U.S. sorghum farmers to send a signal to Chinese merchandisers beginning this year that we are ready and able to meet their needs. This means more acres and more production, and fortunately, the economics are on our side. Consider this: Kansas State University crop budgets for the south central region project a per acre return for sorghum of $96.57 compared to returns of $70.34 and $20.24 for corn and soybeans, respectively. These budgets project the price of sorghum at 91 percent of the price of corn. Think about the advantage for sorghum if basis moves to parity with corn.

Sorghum farmers, China needs your product. Let’s step up to that challenge in 2020!

This story originally appeared in the Spring 2020 Issue of Sorghum Grower magazine in the features department.

The Global Significance of Sorghum – Africa

The Global Significance of Sorghum – China

The Global Significance of Sorghum – Mexico

An Appetite for Sorghum