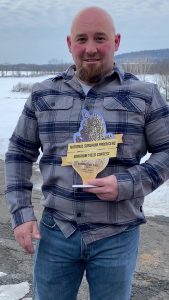 Finishing just over 200 bushels per acre, Irrigated East Winner Jeffrey Barlieb did not think his year would end as strong as it did. Despite only receiving 0.8” of rain from late May until mid-July and a small disease issue, Barlieb was able to bring back his crop with more than ample rain in late summer and help from a crop consultant. Barlieb only had to irrigate 3” inches thanks to timely precipitation. A history of trial and error, learning from the past and embracing the present is what Barlieb believes led to his success. 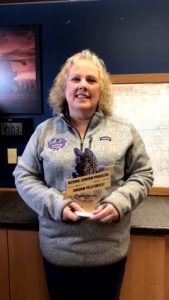 An above average rainfall set the 2020 Irrigated West winner Kimberly Gamble up for a great year. Gamble said this was a good year for her family facing no substantial problems with her crop, receiving enough rain to not irrigate for 28 straight days. Gamble followed practices that have proven successful on her operation like strip-till methods and a formulated combination of fertilizers. Gamble said these are things she can control and makes sure to do them correctly. The Gamble family has a history of success in the Sorghum Yield Contest. Kimberly’s husband Ki was inducted into the Sorghum Hall of Fame in 2019. Gamble said her entire crop this year was exported to China. 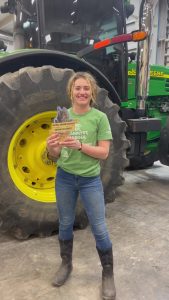 This year was a remarkable year for Dryland No-Till East winner Ella Johnston. Even with a few hail and wind storms, Johnston said growing conditions were perfect this year. A good fertilizer program of nitrogen, phosphorus, potash and hog manure, 40” inches of rain and minimal weed pressure led Johnson to break the U.S. dryland sorghum yield record, harvesting over 245 bushels per acre. This record breaking yield was sold to a local mill that uses sorghum for birdseed. “It’s an honor and a great achievement for me,” 17-year-old Johnston said. She comes from a family of yield contest winners. Her mother, Winter Johnston, was inducted into the Sorghum Hall of Fame in 2020. 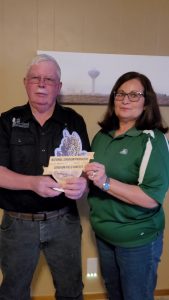 Calculated weed control and a mild August in northern Kansas were key factors across the Long operation, said Dryland-No Till West winners Jerry and Sue Long. Using a steady rotation of wheat, sorghum and soybeans, the Longs were able to utilize wheat stubble in their sorghum field to hold moisture in the ground. This rotation played an important role as they received only 14” of rain this growing season. Chinch bugs did pose to be a slight problem this year, but the Longs were able to turn their attention to a nearby grass field, Jerry said. “[National Sorghum Producers] has done a substantial job of exploring exports,” Jerry said, noting his grain sorghum is mostly exported to international markets. 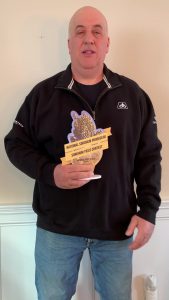 This year’s Dryland Tillage East winner Santino Santini is a familiar face in the sorghum yield contest. Santini attributed his success to a good fungicide treatment and a nitrogen-focused fertilizer program. This, mixed with what Santini said was rain at the right time each week, made this year almost perfect for his crop. “[I am] proud to represent the state of New Jersey,” Santini said, “and let people know we can compete with any state in the country.” Santini marketed his 204-bushel yield crop to a bird seed mixer in Pennsylvania. 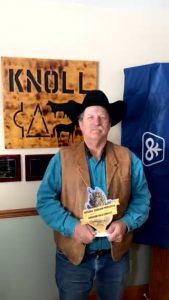 Hard rains of early spring in South Dakota wiped out 2020 Dryland Tillage West winner Dave Knoll’s initial crop, he said. Despite these heavy rains, Knoll said this became the perfect weed control with high moisture keeping the weeds out of his crop. “I’ve done this quite a few years, and I didn’t expect this to be my better year,” Knoll said. “It just goes to prove that you never know what is going to happen.” Knoll focuses his operation on growing white sorghum, which led him to choose Pioneer seed variety 89Y79. Whether being sold to birdseed mixers, alcohol production or personal use, Knoll said this variety markets better in his area. 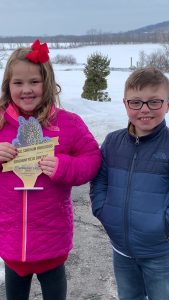 Stephanie Santini, the 2020 Food Grade winner, said the 2020 season maintained near perfect growing conditions for her crop. Receiving over 40” of rain during this growing season, she was able to maintain a consistent moisture profile. Santini said she selected a Sorghum Partners seed variety because it contains good genetics and is high yielding. The Santini family’s competitive nature is apparent every year in the yield contest. This year, Stephanie is joined by Santino Santini, who also won his division, with several other family members placing in the Top 3 national rankings of their respective categories.