LIBERAL, KS (October 15, 2020) — National Sorghum Producers (NSP) today shared a high-altitude view of a top policy priority with newly released aerial photos of a farm plot in Kansas emblazoned with “#SupportEthanol” spelled out in giant letters of sorghum. Rocky Ormiston, a farmer from Kismet, planted the message using the latest in precision agricultural tools and a mix of red and white/yellow sorghum varieties. 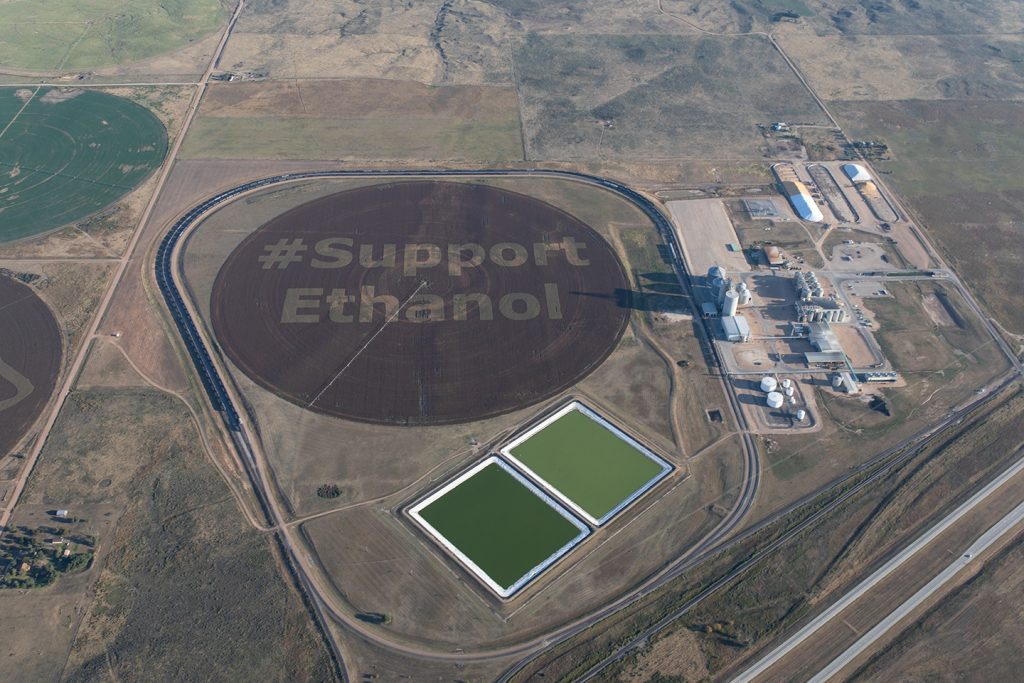 “Innovative tools not only help U.S. sorghum growers lead the way on sustainable agriculture, they can offer a unique platform to share our support for low-carbon biofuels,” said NSP CEO Tim Lust. “One-third of the U.S. sorghum crop is used to produce fuel ethanol, which protects our climate and lifts up rural communities struggling in the wake of COVID-19.

“Unfortunately, secretive exemptions from the Renewable Fuel Standard (RFS) have threatened those markets, so farmers are using every tool available to remind President Trump why we need him to put a stop to biofuel demand destruction by the Environmental Protection Agency (EPA). The recent denial of 54 retroactive refinery waivers was a good first step in doing so.”

Ormiston planted the design using customized equipment on a DB80 John Deere planter, which drops seeds in a pre-set pattern guided by satellite, aerial and drone imagery. Details on the process were featured in this summer’s issue of Sorghum Grower magazine.

“We are investors in our local ethanol plant because it plays a large role in the continued success of our community and the corn and milo industries, both economic drivers for rural southwest Kansas,” Ormiston said. “I chose the #SupportEthanol design for one of my sorghum fields because ethanol is made from crops produced by American farmers and is a renewable resource that can be used by all, and we need to support that.”

Like much of the sorghum grown across Kansas, portions of the harvest are likely destined for one of twelve Kansas ethanol plants, seven utilizing sorghum, which produce half a billion gallons a year.

“This is one message that would be hard to miss for lawmakers flying to and from Washington, D.C.,” said NSP and Growth Energy board member Tom Willis, CEO and president of Conestoga Energy Holdings, LLC, which operates the nearby Arkalon Ethanol plant in Liberal, Kansas. “Now more than ever, policymakers need to hear from rural communities about our priorities and the vital role of biofuels in rebuilding the agricultural economy. That’s why Kansas ethanol producers are proud to work hand in hand with local growers to protect the market for clean, affordable energy.”

To learn more about precision agriculture and U.S. biofuels, visit SorghumGrowers.Com. To share a message with lawmakers about harmful EPA policies, supporters can take advantage of the Growth Energy comment portal at https://GrowthEnergy.Org/takeaction.

National Sorghum Producers represents U.S. sorghum producers and serves as the voice of the sorghum industry coast to coast through legislative representation, regulatory representation, and education. To learn more about NSP, visit www.sorghumgrowers.com.