A Pioneer in Precision Planting

A Southwest Kansas producer makes light of 2020 season using precision planting to turn his fields into works of art.

Flying over southwest Kansas, you will see field after field of sorghum, but come August, you may likely do a doubletake at some unique aerial views over Ormis­ton Farms.

Rocky Ormiston, a sorghum farmer from Kismet, Kan­sas, took a new twist on precision planting this year, turning his sorghum fields into eye-catching works of art.

In the early phases, Ormiston’s sorghum fields looked like any others, but as the sorghum reaches the hard dough stage, Ormiston’s fields will have their own distinct appearance. He is using precision technologies to plant five sorghum fields with different designs—a Kansas City Chiefs logo, his Ormiston Farms logo, a Pioneer logo, a Trump 2020 banner with an American flag and #SupportEthanol adjacent to an ethanol plant his family invested into. The designs in the fields will be made using a mix of red and white/yellow sorghum varieties. 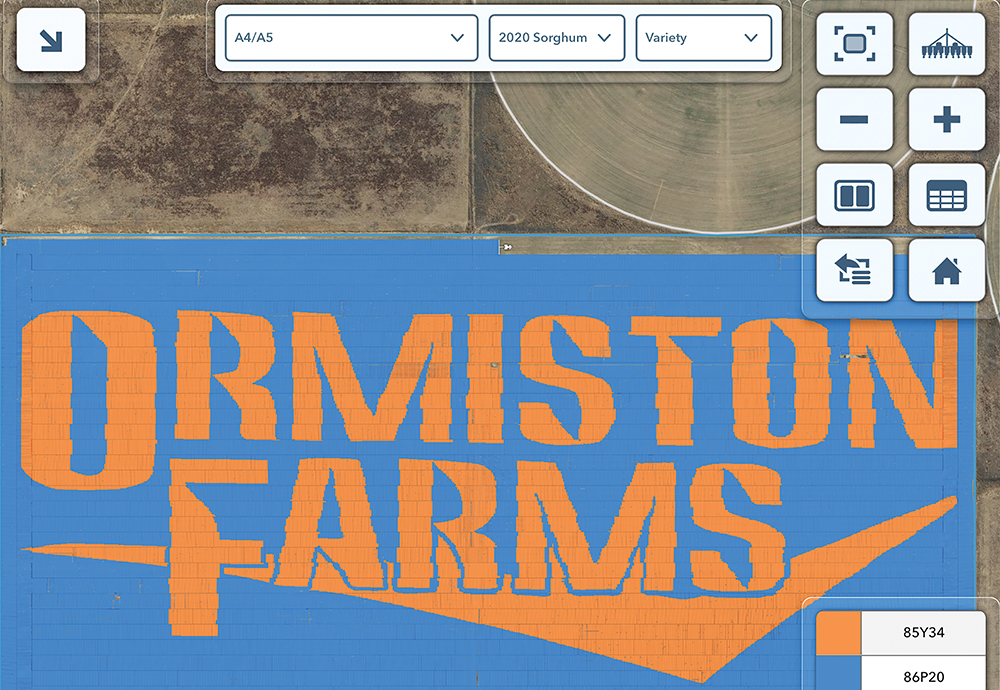 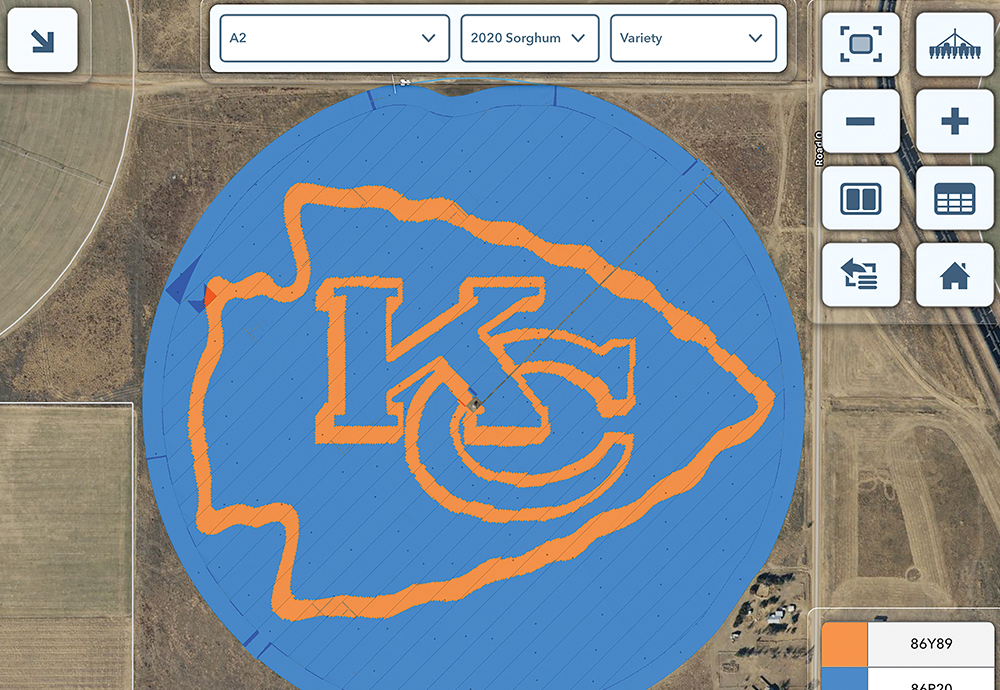 “You know, it’s something fun to do,” Ormiston said, “and, right now, farming is not very fun so we have to make ways to smile about it.”

Ormiston bought a used DB80 John Deere planter in 2017, stripped it down bare and built it up with precision technology, including Vset Select meters with hydrau­lic down force. The planter has two tanks to hold seed and drops it based on a prescription. The prescription is basically a vector image design placed on a geo-referenced map of the field. The prescription tells the planter where to drop each type of seed, and, according to Ormiston, is accurate up to an inch.

Although they farm primarily irrigated acres, Orm­iston said they picked up five quarters of dryland within the last two years, and sorghum was the best fit for those fields. Ormiston said he has seen moderate yield improvements using precision planting in corn, but this season is his first year to use the precision planting technology in his sorghum fields. Ormiston said even moderate improvement in yield can have a positive impact on profitability.

Ormiston works with Crop Quest Inc., a crop con­sulting and agriculture production management company out of Dodge City, Kansas, to build his precision planting prescriptions. He worked with Crop Quest agronomists and precision ag specialists to determine the optimal sorghum varietals to minimize risk while still getting the best look for the designs he wanted.

After they were designed, Ormiston shared the prescrip­tion maps of his sorghum fields on social media and said he has received a lot of positive feedback from other farmers online. He said farmers know precision technology is out there, but many have not seen it used for this purpose.

John Gibson, a precision ag specialist for Crop Quest, said the Ormiston family has been a pioneer in precision planting technology in the area.

“You’ve got your leading edge type innovators that are always pushing the limits,” Gibson said, “and I would defi­nitely say that Rocky and his dad have always been willing to take that stance.”

Gibson said although Ormiston is, in this instance, not using precision planting in a conventional manner, his willingness to try new things and share his results on social media have drawn considerable attention to precision tech­nologies and their capabilities.

Ormiston said he has seen the increases in yield and profitability that precision agriculture can bring to the farm, but it is important for farmers to do their due diligence before they invest. Ormiston said he ran the numbers, dove into data and talked to several farmers across the country to determine if the new technology was right for his operation.

Gibson also stressed the importance of taking a hard look at what has worked and what has not. In the past, he said most people believed precision agricul­ture was about evening out a field, but it is really about maximizing your return on investment for each acre. He said precision agriculture is not a one size fits all program but a tailored program to match conditions in a given field or area.

Gibson also explained any change is likely to be a bit uncomfortable. Farming is a personal industry, and it can be challenging to step out and try something new, even if it can improve yields and profit.

He said starting with small, simple changes like planting straight through irrigated circles into dryland corners saves money on turning around, and working toward bigger changes like using satellite imagery and variable rate seeding and fertility can help ease the pro­cess of implementing new technologies and techniques.

“The main thing is just be willing to get a little uncom­fortable, figure out what you’re willing to do and take a step,” Gibson said.

Although making the initial switch to precision planting may be uncomfortable, Ormiston said once he got started, the process was easy. He said he has been impressed with the precision technology in every field he has planted, whether it is an image or variable zones.

Ormiston expects his sorghum fields to mature in September, so whether you are flying over southwest Kansas, scrolling through Twitter, or looking to invest in precision technologies yourself, look out for Ormiston Farms’ creative spin on precision planting.

This story originally appeared in the Summer 2020 Issue of Sorghum Grower magazine as a feature.