When Toyoda happened to visit an American grocery store, the seeds of the revolutionary Toyota Production System—commonly known now as just-in time production—began to take root.

Toyoda believed the manufacturing supply chain could replicate the lean efficiency of a grocery store where inventory is meticulously managed, so stores restock shelves to replace just what is purchased by consumers. Beyond elevating Toyota to the upper echelon of the automobile industry, this philosophy spread across the increasingly globalizing economy with manufacturers across all sectors adopting a more agile approach to production. In order to minimize costs, orders are placed on short notice and inventory is minimized. In conjunction with liberalized trade policies and free trade agreements, the Toyota Production System helped usher in the new era of an interconnected global supply chain in which each link in that chain must be able to play its part on demand and without delay.

But what happens when major, unpredictable disruptions do occur? While manufacturers build some risk-based flexibilities into just-in-time production strategies, the current coalescence of a global pandemic, devastating weather events, raw material scarcity and labor shortages is begging urgent questions about the resilience of the global supply chain. In agriculture, the supply chain crunch is sending the costs and availability of some critical agricultural inputs sky-high, driving many U.S. producers to rethink 2022 planting decisions.

Perhaps the most illustrative example of this phenomenon can be seen in fertilizer availability and costs. While weather events such as the winter storm and summer hurricane season hobbled domestic production, it is global fertilizer exports facing the sharpest challenges. Europe, a major producer of fertilizer, has seen the price of natural gas (the primary feedstock and process fuel for ammonia production) climb to six times over what it was last year due to energy constraints. On top of that, geopolitical tensions with Russia—the region’s major supplier of natural gas—over the national security implications of a cross-border energy infrastructure project are further limiting its availability, which, in turn, restricts fertilizer production.

However, while Europe plays an important role in the global agricultural input crunch, all roads eventually lead back to China. Like Europe, China is experiencing its own energy supply crisis, which caused the world’s largest exporter of phosphate to briefly pause urea and diammonium phosphate exports earlier this year in order to focus on servicing the country’s share of the global boom in feed grain plantings in 2021. As production challenges cascade across continents, the Green Markets North America Fertilizer Price Index rose to $996.32 per short ton in mid-October, well beyond the previous high recorded in 2008, to levels not observed since the index was first published in 2002. 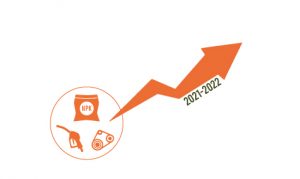 Fertilizer isn’t the only agricultural input whose price and availability is being affected by a litany of supply chain disruptions in China. Agricultural chemicals, particularly glyphosate, are experiencing significant price hikes and strained inventories as we enter Q4, typically the highest exporting quarter of the year for the products. A variety of factors, including new environmental quality mandates ahead of the 2022 Winter Olympic Games in Beijing, have limited production of raw materials such as yellow phosphorus, a key ingredient in glyphosate and other organophosphorus products.

Like with fertilizer, U.S. growers are disproportionately reliant on export markets to fulfill agricultural chemical demands due to recent extreme domestic weather events. Hurricane Ida knocked out the Luling, Louisiana, Bayer plant—the largest U.S. producer of glyphosate— for weeks, causing another rippling disruption through the supply chain. Also, like with fertilizer, these production challenges are compounding to send projected prices of glyphosate well beyond highs seen in 2008.

The challenges facing China’s sprawling share of the global supply chain extend beyond raw materials and manufacturing sites. In fact, across all the disruptions to the global supply chain in the last 18 months, bottlenecks in China’s shipping and transit infrastructure have perhaps been the most caustic to prices and availability of both agricultural inputs and goods in general.

This summer, Bloomberg’s Ann Koh charted the path of one shipment of fertilizer from China ordered by a midwestern U.S. farmer and observed that it experienced COVID-19-related shutdowns at two separate ports along the way due to infected workers. In between those two shutdowns, a particularly active typhoon season forced all ships to evacuate the Shanghai port and restricted movement of goods through China’s arterial system of rivers. In all, these slowdowns pushed a fulfillment that typically took 70 days pre-pandemic to eight months and counting.

In total, there are 25 million containers in the global supply chain and roughly 6,000 ships tasked with hauling them between ports. A variety of factors, from U.S. labor shortages to resurgent consumer demand post-pandemic, have dramatically reduced the availability of these containers and burdened shippers with demurrage costs as a consequence of the slowdown. By many metrics, this came to a head in September when the median cost of shipping a container from China to the West Coast of the U.S. climbed above $20,000 with surcharges and premiums factored. While October has seen that figure drop by 11 percent (the steepest decline since the beginning of the pandemic), many experts do not expect the logistical knot to be fully unraveled until well into 2022. These unprecedented freight costs affect the scarcity and costs of all agricultural inputs, as well as equipment, raw materials and other resources critical to any modern farming operation.

By all accounts, in the long-term, the unceasing thrum of economic activity will soothe the global supply chain back to an equilibrium. But the disruptions over the past 18 months have exposed the links in that chain to be more fragile and more susceptible to fraying than once thought possible. As farmers brace for skyrocketing input costs, though, one thing still rings as true in 2021 as it did in the 1950s when Eiji Toyoda walked into that Michigan grocery store: agriculture is right in the middle of it all.