While the pandemic pushed on, work still had to be done, and some farmers have taken innovation from the seat of their tractor cab to new levels, setting up unique video conferencing abilities.

Through fortuitous timing, Stockton, Kansas, sorghum producer Dan Atkisson set up an RTK GPS system in his farm equipment before the COVID-19 pandemic started, and when the world turned virtual as a means to continue to work and accomplish goals, Atkisson turned his tractor-mounted iPad into his own virtual office.

An RTK base station sits on top of his parents’ house close to the farm. Through the DigiFarm VBN network of antennas that communicate with satellites across the U.S., the RTK provider transmits data to his tractor through a cell signal. The iPad receives the data and pushes out GPS information over bluetooth to the other two devices in the cab.

Authenticity and Advocating for Sorghum

Since then, Atkisson has taken several video conference calls from the tractor cab. He said it provides a show-and-tell opportunity, adding a level of authenticity to the work farmers do.

In a video conference meeting with newly elected Kansas Congressman Tracy Mann, Atkisson said it was one of those days where it was bitter cold in Kansas with temperatures 10 degrees below zero, and he had cows to tend.

“I had my ear flap cap on and my hood up, freezing to death in my pickup,” he said. “Of course, I apologized and said, ‘Excuse my appearance. I did want to show my face though and give you the weather update from the Big First district.’ [Congressman Mann] commented back, ‘We appreciate what you’re doing, and it’s good to see that the people we’re talking to still have boots on the ground.’”

Atkisson said while sitting on the tractor can be a distraction and may not be appropriate for all situations, he does feel it can add credibility to the issues farmers are bringing to the table.

“I think if a legislator is talking to someone sitting in a tractor, using no-till practices, it really adds to the knowledge factor of that conservation topic,” he said. “I do think even with legislators like Jerry Moran, who are very much engaged in agriculture, it doesn’t hurt for him to see the people he’s talking to are seriously engaged and know what they are doing because they’re doing it right then.”

Atkisson said there are pros and cons to this approach, and as a representative of the industry, he has always tried to make Zoom meetings as professional as possible, noting it becomes easier when there is already a relationship established between individuals on the video call.

“When you’re on a call with people you’re somewhat comfortable with, you can make the little jokes and things that make it a little more casual,” Atkisson said. “Then you get on other Zoom calls that are so stodgy, you’re scared to death you’re not muted or don’t know when to speak up or you’re afraid to say something weird.”

What’s Next for Virtual Workflow

Atkisson admitted, like many farmers, he is ready to see people in-person. There was a time he was not always excited to jump in the truck and drive to a meeting, but with what is being characterized as Zoom fatigue, he said he and his wife are elated to attend a meeting planned in Amarillo at the end of the summer.

Going forward, however, Atkisson feels virtual components to meetings are here to stay.

“The amount of business that we’ve accomplished over Zoom, I think is tremendous,” he said. “Before, I was so burned out sitting in the house taking those types of calls, but now I don’t have to sit still to do this. I can do it while I’m out on the tractor.” 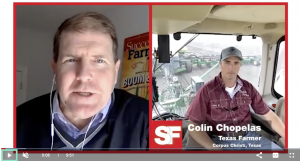 Corpus Christi sorghum farmer Colin Chopelas has also taken video conferencing on the go. Most recently, he completed a widely viewed video interview with Successful Farming, discussing corn and sorghum planting from the seat of his tractor cab.

His setup—a phone bracket mounted to his rearview mirror with a clip and a little farmer ingenuity, also known as Gorilla Tape®.

Authenticity and Advocating for Sorghum

Chopelas said his initial pandemic video conference experience took place last July when he spoke on a Zoom call with Chinese end-users on behalf of sorghum farmers during the middle of harvest.

“That was great because, normally, if you’re busy harvesting, you’re not going to take the time to get out of the combine and go have a meeting with somebody or sit down at a dinner meeting,” Chopelas said. “That experience was really easy because I was able to get off the combine and log into a Zoom call and talk about where the sorghum crop and harvest was in South Texas, and it was viewed by hundreds of people across the world.”

Chopelas said he wasn’t as experienced doing calls from the cab then and, in hindsight, wished he had done the update from his combine rather than his home, but still being on the farm, he felt his message about how the crop was progressing was well received.

Like Atkisson, Chopelas said he is fortunate to have good cell service in his area but recognizes there are those who do not. Other challenges Chopelas identified are not being able to read the room and have a full understanding of individuals he serves with on various boards and committees.

“I think the biggest thing you lose by not being in a meeting in person is not being able to get a feel in a boardroom about certain things, even if they are unspoken,” he said. “You understand what they mean just by their body language and by the way they address the subject. You can’t really get that feeling looking at a cell phone or a screen.”

What’s Next for Virtual Workflow

Despite these challenges, Chopelas said he hopes opening meetings and forums up to be viewed virtually continues. South Texas agriculture producers run on a completely different schedule than most other parts of the U.S., and with meetings like Commodity Classic, for example, moving onlinel this year, Chopelas said he was able to participate for the first time.

“I’ve never been able to go to Commodity Classic even when it’s held right down the road [in San Antonio] because we’re always planting that time of year,” he said. “This year, I was able to get in all of the stuff I wanted to participate in, and I hope these large organizations and state and national organizations will continue to do that so we can at least participate in portions of their programs.”

Chopelas said the pandemic has forced the agriculture community to take a giant leap forward catching up on technology, which is a long-term positive effect of being reliant on visual sources.

“If you would have said we’re going to have a Zoom call talking about marketing, nobody would have participated in that a year ago,” he said. “Now, it’s socially acceptable to take part in virtual learning, and that’s great because you can still function and farm, helping us become even more efficient.”