It has been a busy year for National Sorghum Producers. Historically, producer organizations are busiest when Congress is writing a farm bill. However, with the increasing importance of crop insurance to the U.S. farm safety net, every year has the potential to be as busy as a farm bill year.

“RMA is as active as it has ever been,” Combest, Sell & Associates (CSA) Chief Economist Brad Weddelman said. “Government agencies being active is not always a good thing, but fortunately today’s RMA is as responsive as it is active, and current leadership wants crop insurance to work for producers rather than against them.”

Responsiveness to problems is key for sorghum producers, including, and especially, those with limited irrigation water. By all accounts, crop insurance for irrigated sorghum production is not working.

“In a sense, crop insurance is actually built into sorghum,” Sustainable Crop Insurance Services Manager Chris Cogburn said. “The crop uses one-third less water than corn and tolerates the heat better, so it’s often planted as an alternative to corn in dry years and when irrigation water is limited. Ironically, this fact often sets sorghum up for failure, and because crop insurance coverage is based on county yield history, these failures amount to inadequate protection for situations where irrigated sorghum is a much-needed option.”

Cogburn added there is no simple solution and the problem is two-fold with both declining yields and rising rates confounding producers with limited irrigation water hoping to transition from corn to sorghum. In the most extreme cases, these rate differences completely preclude irrigated sorghum production, driving sorghum insurance costs as high as 19 times those of corn insurance.

“Yields and rates follow farming practices, for better or for worse, and this double-edged sword makes the problem difficult to address,” agreed CSA’s Weddelman. “However, from RMA’s perspective, and the perspective of the insurance companies, producers planting and insuring less risky crops is desirable behavior, so producers need an insurance option that does not penalize them for such behavior.”

Cogburn said one solution is an area-based insurance plan that triggers indemnities based on the applicable area plan of insurance for corn. Plans like these pay an indemnity when the county experiences a loss, and NSP worked with RMA for more than three years to determine the best solution. Prior to that, NSP worked with Members of Congress to insert language into the 2018 Farm Bill instructing RMA to examine the problem.

This plan would come with the downsides accompanying all area plans—namely, the risk that a producer has a loss on his or her farm, but the area doesn’t trigger, and no indemnities are paid. Despite this risk, the plan will be an additional option for producers where irrigation water is needed. NSP expects the option will be available in 2023.

Also on the table for a 2023 rollout is an addition of the contract price option as an alternative for sorghum producers, advocated for by NSP. The contract price option would allow producers selling sorghum into a specialty market to insure their crop using the price included on their contract, which is important because of the added value that accompanies most specialty markets.

Earl Roemer, president of Nu Life Market, a leading sorghum producer of food products including gluten-free flours, brans and whole grain options for those with gluten sensitivities, said the average premium for sorghum used for food applications is $1.00 per bushel.

“Producing food-grade sorghum requires a management commitment by the producer beyond what would normally be necessary for commodity sorghum used in feed and fuel applications,” he said. “It is important to provide these producers the opportunity of a contract price option to help protect their increased investment in costs of production.”

Richardson Seeds President Larry Richardson agreed on the need for more risk management options for specialty sorghum producers, noting the average specialty premium for producers he works with is $0.80-$1.50 per bushel. However, he cautioned that the contract price option currently offered by RMA will not work for every producer or in every situation.

“Neither side would want a binding contract too early,” Richardson said of some producers and end-users. “They both want and need to keep options open and often agree to keep doing business as usual.”

Fortunately, the contract price option is just that, so producers have flexibility to use it or not, depending on their needs. It is expected to be available in 2023.

For commodity sorghum producers, the price election is based on an average of September or December corn futures prices—depending on the sales closing date—multiplied by a factor calculated using Agricultural Marketing Services (AMS) prices. This factor, and the formula behind it, were revised by RMA in 2009 after eight years of work by NSP. The revision meant RMA included data representative of actual sorghum producer prices for the first time.

“Securing the current price election formula was one of the most significant victories in the history of NSP,” said Cogburn, who at the time was serving as NSP strategic business director and overseeing the organization’s work with RMA. “The old formula was just not effective. Currently, we have a formula that accurately reflects the value of sorghum relative to corn and captures the ups and downs of the market without subjecting producers to extreme highs and lows.” 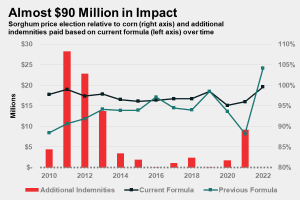 Why revisit such a successful formula? Due to federal budget cutbacks, AMS stopped reporting prices in certain locations, and some of these locations are used to calculate the sorghum price election. It is unclear what the future for this formula looks like, but NSP began work to ensure sorghum producers are no worse off after it is updated.

“Francie Tolle at the Kansas City RMA office is a producer herself,” Cogburn said. “For that reason, she wants to see an actuarially sound program that will be around to help producers for many years, and, most importantly, she wants a program that works for producers. We’re really looking forward to working with Francie, Zach White and the rest of the outstanding team in Kansas City on a new price election formula.” The timeline for an actuarial update is unclear, but discussions between NSP and RMA are underway.

Rounding out NSP’s active 2022 are conversations related to a potential expansion of double crop insurance and the effectiveness of current damage discounts for quality loss adjustment.

In what is likely to be the most significant one-time expansion of coverage offered by RMA in history, the agency has proposed to radically increase the number of counties where double crop sorghum and soybeans can be insured. For sorghum, this action could see double crop coverage expanded or streamlined in more than 800 counties.

“In some counties, the expansion will come in the form of additional offers that will require existing double crop producers to insure,” Weddelman said. “In most others, the expansion will mean no production history requirements as a condition of insurance and a streamlined written agreement (WA) form that eliminates the need for the arduous WA process.”

The Crop Insurance Professionals Association (CIPA), an association that serves as a voice for crop insurance agents, is also represented by Combest Sell & Associates, and Weddelman noted CIPA members in the Sorghum Belt welcome proposed double crop insurance changes as a positive move for the region.

Cogburn said the expansion will mean thousands of sorghum producers will have the option to insure double crop sorghum virtually overnight under a WA. “The process will be easy on both the producer and the agent, and producers already growing double crop sorghum, but not insuring it, will not be required to do so,” he said, adding that RMA expects expanded options will be available mostly in traditional double crop areas in 2023.

Regarding damage discounts, Cogburn noted NSP is having preliminary discussions with producers and RMA about changes to the discounts included in the actuarial documents.

With significant quality challenges on the Texas Gulf Coast in 2021, a number of producers have expressed interest in revisiting these discounts to avoid quality loss adjustment problems in the future.

These discussions have just started and will likely entail an adjustment of these damages to better reflect commercial discount schedules. It is unknown when such an adjustment would be made.

Q: What crops and perils did early crop insurance cover?

A: The first focus was multiple peril crop insurance (MPCI) for wheat.

Q: Who were the early companies providing this coverage?
A: Due to inordinate risk, crop insurance was provided by the federal government from the very beginning.

Q: When did crop insurance in its current form begin?
A: Crop insurance limped along from its inception in 1938 until 1980 when delivery was turned over to private companies and agents. That’s when it really began to take off.

Q: When was the Risk Management Agency (RMA) created?
A: RMA was created in 1996. Prior to that, the Federal Crop Insurance Corporation administered the program.

This story originally appeared in the Summer 2022 Issue of Sorghum Grower magazine.

NSP and the 2022 Farm Bill: Saddled Up and Ready to Ride