Filled with casino games, a silent auction and a live auction, this year’s event generated over $95,000 to help promote worthy legislative lawmakers.

Thanks to the donations of many generous contributors, the 2019 Sorghum PAC Casino Night and Auction was the most successful in program history. This year’s auction generated over $95,000 to help promote worthy legislative lawmakers. 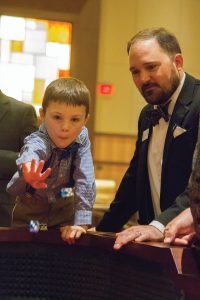 The Sorghum PAC Casino Night took place during Commodity Classic on March 1 in Orlando, Florida. In addition to a live, silent and online auction, there were casino games, slot machines and various other raffles and forms of entertainment. Items in the auction included a Case IH tractor lease, various types of hunts, Yeti coolers, jewelry and sorghum seed. Sorghum growers and other commodity farmers from across the nation were in attendance.

The past two years, National Sorghum Producers has strived to make the PAC Casino Night and Auction more dynamic and diverse. This revamp of the event included the addition of new games like a gun safe drawing and a money cube as well as new auction items ranging from helicopter hog hunts to NASCAR weekend passes and more. Big Iron Auctions also played a key role in the success of the event, engaging participants and making the auctions exciting for all who were there.

National Sorghum Producers would like to thank all those who donated items, attended the event and participated in the auctions. These contributions play a key role in enabling growers to unify their voices to uphold and protect the interests of sorghum growers in Washington, D.C.

This story originally appeared in the Spring 2019 Issue of Sorghum Grower magazine in the Sorghum Shortcuts department.