The NSP board of directors recognized Peterson for his support and leadership crafting the 2018 Farm Bill that provided effective risk management tools, advances in conservation policy and continued support for sorghum ethanol production. 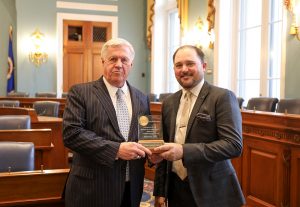 “Chairman Peterson has been a true and devoted champion for U.S. agriculture,” NSP Chairman Dan Atkisson, a sorghum producer from Stockton, Kansas, said in a statement. “His leadership through the 2018 Farm Bill provided certainty producers needed during a trying time, and he has remained a steadfast voice of reason throughout his tenure on the House Agriculture Committee.” 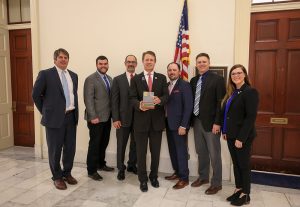 representation of farmers in the U.S. Sorghum Belt. Marshall represents the first district of Kansas, the largest sorghum producing state in the nation, and has advocated for sorghum producers with the Environmental Protection Agency, through support of Renewable Fuels Standard policies and helping to find resolutions for farmers during the China tariff issue.

“Congressman Marshall represents a large number of our grower members in Kansas and has been a powerful advocate for the Kansas Big First,” Atkisson added. “We appreciate his relentless efforts to be a champion for sorghum and the Kansas farmers he represents.”

NSP thanked agency officials and members of Congress for their work on passing USMCA and progressing trade with China. They also urged new trade agreements to significantly expand U.S. agricultural exports. However, it was also noted the U.S. agriculture economy is still struggling due to prior and current trade barriers as well as low commodity prices, and absent significant improvement to the U.S. agriculture economy, additional aid could be necessary to keep farmers and ranchers on their feet.

NSP thanked members for the provision in the 2018 Farm Bill which required the Risk Management Agency to study premium rates for sorghum farmers. On the conservation front, participants urged Trump Administration officials to carry out congressional intent by making sorghum eligible to be used in a resource conserving crop rotation per the 2018 Farm Bill. The rules guiding such payments are currently making their way through USDA at both the state and national levels.

This story originally appeared in the Spring 2020 Issue of Sorghum Grower magazine in the Capitol Hill department.