As the number of large corporations increase their climate commitments and outline improvement initiatives, Field to Market is helping the agriculture community recognize how their products can align with these goals – and sorghum’s sustainability qualities place it in excellent position to help these corporations meet their goals.

In an effort to consolidate U.S. food and agriculture’s climate commitments, Field to Market (FTM), an organization focused on uniting the supply chain for sustainable outcomes in agriculture, published a report titled Climate Action in Food and Agriculture: A Compendium of Field to Market Member Climate Commitments. The report is a comprehensive review of the agricultural value chain outlining climate-related goals.

FTM is working with its members, including sorghum growers, to translate ambition into action. With increasing climate commitments being made in the brands and retail sector, sorghum has a lot to gain.

FTM’s report indicates 90 percent of this sector has made a public commitment to climate action in their own operations with 62 percent of the sector committing to drive change among key suppliers and farmers who produce the raw materials for the products they manufacture and sell. Nearly half have made a commitment to reducing greenhouse gas (GHG) emissions.

With a majority of these companies vowing to become carbon neutral, significantly reduce GHG emissions and substantially increase plant-based product, sorghum can play a large role in helping them reach their goals. With major players in the retail sector reaching toward environmentally-conscious alternatives, using sorghum as a key ingredient in product formulations could help slash atmospheric carbon production and reduce emissions.

FTM President Rod Snyder and his team are at the forefront of catalyzing productive and profitable opportunities across agriculture’s value chain for improved environmental outcomes.

“[These companies] often have similar goals but approach them from different angles,” Snyder said. “In the end, what is the commonality that runs across all of those sectors? We can help pull together and build consensus around [these commonalities.]”

FTM recognizes the increasingly complex problem of producing enough food, feed, fuel and fiber while preserving natural resources. In an effort to help their members set measurable goals, FTM developed eight indicators through the Fieldprint Program—biodiversity, energy use, GHG emissions, irrigated water use, land use, soil carbon, soil conservation and water quality. Sorghum has a strong role to play in all FTM’s indicators. 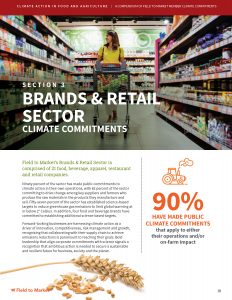 FTM Communications and Membership Manager Carter Purcell said large retail brands and agribusinesses have begun to take notice of sorghum due to their increasing urgency to address climate concerns. She said while we tend to view sustainability at a micro level, it is important to view this concept through a macro lens.

“We look at this from an individual farm level, but I’ve found it very interesting to analyze how commodity groups and industries themselves are beginning to set targets,” Purcell said.

At the farm level, sorghum producers have been practicing no- or reduced-till production methods and planting into standing stubble or cover crops for decades. In fact, 74 percent of our nation’s sorghum farmers utilize conservation tillage practices. These practices help protect the soil from erosion, sequester carbon and lock in moisture to reduce water use while suppressing weeds and limiting pest management technologies.

“This small grain offers big benefits for our health, our water, our wildlife and our world,” Everhart-Valentin said. “Food, pet food, feed and energy industries can all benefit from sorghum’s ability to give more than it takes.”

The FTM report illustrates how members of the organization’s grower, agribusiness, brands and retailer, civil society and affiliate sectors could look to sorghum as a stepping stone to reach their outlined climate commitments. The sorghum industry and FTM are collaborating with several players, including other commodity groups, industry partners, large consumer brands, conservation groups, news outlets, universities, extension services and nongovernmental agencies to advance this mission.

Climate commitments among major manufacturers will not be taken lightly by consumers or producers. At some link in the value chain, those making the commitments will be asked for evidence showing progress in meeting these goals. For those representing the brands and retail sector, sorghum has the opportunity to act as a major ingredient in new and existing products as these companies strive to combat climate challenges and help reach their commitments in the coming decades.

Snyder said through consumer, producer and manufacturer cooperation, sustainability is an achievable goal for agriculture. Measurable sustainability goals can be reached when the entire value chain works collaboratively.

This story originally appeared in the Winter 2021 Issue of Sorghum Grower magazine.