One of grain sorghum’s strengths is that it typically takes less capital to grow com-pared to other summer crops. However, with all commodities input costs expected to increase this coming year, growers should be looking to manage expenses wherever possible.

Profile soil sampling is often stressed at grower meetings but seldom put into practice. Sampling for deep nitrogen in the soil profile, especially for fields located in the Great Plains, should be beneficial. Every pound of nitrogen in the second and third foot of soil can be credited against the total amount that needs to be applied as fertilizer. When compared to the current price of fertilizer, soil sampling could prove to be better for producers’ bottom lines.

Rather than applying all recommended fertilizer pre-plant, producers should consider applying nitrogen fertilizer in multiple applications. In addition to reducing the chance of overapplication, this practice, from a cost standpoint, allows growers to match the amount of fertilizer applied to later growing conditions that determine potential yield.

Consider applying 50 percent of nitrogen fertilizer preplant and 20 percent at planting. Assess growing conditions 20-30 days after emergence and adjust the remaining amount of fertilizer to be applied accordingly.

Pre-season weed control during the winter and early spring months is critical in all crops. Controlling weeds prior to emergence is ideal. Atrazine is still very hard to beat for pre-emergence weed control and should be included in most early pre-plant applications. Weed control is ALWAYS easier and less costly when the weeds are small. It is recommended producers scout fields and apply appropriate herbicides early. Use a combination of herbicides but be selective. There are many new products on the market, some more costly than others. Keep in mind these are all mixes of old herbicides, and do not overspend on unproven products. A two- or three-way mix of some proven post emergence products such as paraquat, dicamba, 2,4-D and fluroxypyr (Starane Ultra, oth-ers) will go a long way. Although glyphosate resistance of some broadleaf weeds is widespread, the herbicide should be considered if grassy weeds are present.

Since post herbicide options are limited in sorghum, a good pre-emergent program at, or just after, planting is an absolute must. The most common pretreatment is atrazine combined with either s-metolachlor or acetochlor. Although the effectiveness of s-metolachlor or acetochlor with atrazine may vary slightly, depending on the weeds present, their effectiveness is similar enough that the cost of each should be considered. Compare the cost of both name brands and generics, but make sure the concentration and active ingredients are the same. If atrazine cannot be used because of soil type or crop rotation restrictions, consider using Verdict plus Outlook. This is a combination of the active ingredients saflufenacil (Sharpen) and dimethenamid (Outlook).

Once the sorghum has emerged, scout fields early for weed control issues. Similar to preplant weed control, it is much more cost efficient to control small weeds than large ones.

Seeding rate is generally not the place to try and save costs. However, growers should not plant a higher seeding rate than is necessary given the yield goal of a particular field. See the Sorghum Seeding Rates link on the Sorghum Checkoff Agronomy Insights web page at SorghumCheckoff.com for more information.

From an insect control standpoint, scout early and know the economic thresholds for when an insecticide application is needed. In areas where sugarcane aphids have been an issue, consider planting a little earlier than normal, and use a sugarcane aphid-tolerant hybrid. This does not guarantee that an insecticide application will not have to be made, but research has clearly shown the value in these practices.

For growers who are irrigating, there are two sorghum growth stages most affected by water stress. The first occurs approximately 24-30 days after emergence with the initiation of the formation of the sorghum panicle. At this stage, the number of seeds per panicle is determined. The second key stage is at boot—just before heading and flowering. Irrigating at these stages will result in the most return per dollar spent on watering costs. 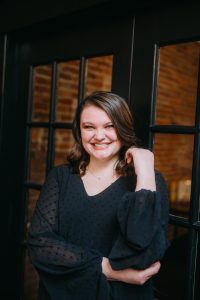 “We’re excited to have Hailey join Team Sorghum,” Sorghum Checkoff Director of Communications Clint White said. “She brings great passion and knowledge of digital marketing with a well-rounded communications background which will strengthen our communications efforts.”

Gilbreath has a bachelor’s degree in agricultural communications from Missouri State University. Before joining the organization, she managed digital marketing and social media efforts at Bedford Camera & Video and prior to that, Bulk-loads.com.

“This is truly an exciting opportunity for me,” Gilbreath said.” Coming from a live-stock background in cattle, I’m thrilled to be a part of the grain and crop industry. My passion lies in helping farmers tell their story, and I can’t be more thankful to have a hand in doing that for the sorghum industry.

Macey Mueller from Halstead, Kansas, was appointed to a Kansas seat. Macey, her husband and four children farm sorghum, soybeans and wheat. They also raise Red Angus cattle and operate a livestock auction company. Meeting producers about marketing opportunities and developing new ways to market sorghum are just a few of the reason why Macey said she is looking forward to serving on the Sorghum Checkoff board.

Kim Baldwin, from Inman, Kansas, will fill the Kansas seat on the board. Kim, her husband and two children farm sorghum, corn, wheat, soybeans and popcorn. Kim was a member of the Kansas Agriculture and Rural Leaders (KARL) Class XV and is an active supporter of Inman FFA where she volunteers to coach students and serve on the alumni board. She is also a volunteer with ComonGround, a group for women in agriculture who discuss farming with consumers and mom groups.

Kevin Pshigoda is a fourth-generation farmer who resides in Perryton, Texas, and farms roughly 12,00 acres of sorghum, wheat, corn and soybeans with his father and two children. Kevin is also a past graduate of Leadership Sorghum Class IV. He will fill the Texas seat on the board.

Adam Schindler currently serves as the Secretary for the Sorghum Checkoff board and was recently re-appointed to his second three-year term as an at-large director. Adam is a fifth-generation farmer from Reliance, South Dakota, where his family farm is a registered South Dakota Century Farm. The Schindler’s grow sorghum, winter wheat, spring wheat, corn, sunflowers and soybeans in addition to running a cow/calf operation with several hundred head. Adam is a graduate of Leadership Sorghum Class I and served on the National Sorghum Producers Legislative Committee prior to joining the checkoff board.

The 13-member board is authorized by the Commodity Promotion, Research, and Information Act of 1996. The Secretary selected the appointees from sorghum certified producer organizations or qualified state organizations. To learn more about Sorghum Checkoff leadership, visit SorghumCheckoff.com

Sorghum Industry Partners with University of California to Advance Sorghum

“We are excited to launch such a unique program aimed at helping address the world’s pressing water issues while at the same time increasing de-mand for a drought-tolerant crop like sorghum,” Sorghum Checkoff Executive Director Nor-ma Ritz Johnson said. “This program is in perfect alignment with the Sorghum Checkoff’s goal of increasing sorghum producer profitability as drought and water scarcity is a challenge faced by most sorghum producers in the U.S. Furthermore, with the recent renewed focus on renew-able energy production, promoting a versatile crop like sorghum in biofuel and bioproduct markets is a timely endeavor.”

The program represents the first collaboration of its kind between the Sorghum Checkoff and the University of California, and key activities will include breeding, gene discovery, phenotyping and research related to the impacts of roots, soil microbes, photosynthesis and management on drought resilience as well as biofuel and bioproduct usage.

“We look forward to the vital research this partnership will support and the benefits it will yield for the sorghum industry as well as natural resource management,” UC Agriculture and Natural Resources Vice President Glenda Humiston said. “We are pleased to partner with Sorghum Checkoff and UC Merced to help advance sorghum as food, feed and biofuel.”

Thomas Harmon, professor and chair of UC Merced’s Department of Civil & Environ-mental Engineering added, “UC Merced is growing its research and teaching in sustainable agriculture, as evidenced by our future Experimental Smart Farm. We are excited by this novel and potentially game-changing partnership!”

The resources from the partnership will be used to hire a program leader, provide capital for program activities and support ongoing research over the next five years. Overseen by an advisory committee, the program leader will actively seek additional funding for projects that serve the objectives of this program and to extend the life of the program beyond 2026.

Milo or Sorghum What Say You?