An Appetite for Sorghum

The Chinese marketplace has created enormous opportunities for American sorghum growers. With an expanding middle class and revitalization of swine and poultry production, this international market has the potential to grow even more.

After three years of challenges, obstacles and anxiety, the eight-year relationship between U.S. sorghum farmers and Chinese grain merchandisers is back on solid footing. Sure, the risk of political meltdown is always present, and a certain amount of chilly rhetoric remains a hallmark of the two countries’ public relationship. However, the Asian giant’s appetite for grain is almost insatiable due to an ever-strengthening middle class growing hungrier and hungrier for a western diet centered largely on animal protein.

Figure 1 depicts daily kilocalorie supply per capita in China and the U.S. If current trends hold, China could soon overtake the U.S. in daily consumption of kilocalories per capita. Considering China is more than four times larger than the U.S., the amount of grain needed to meet such a need is nothing short of spectacular. Trade war or no trade war, political sparring or no political sparing, this demand must be met, and U.S. farmers are in the best position to do so. 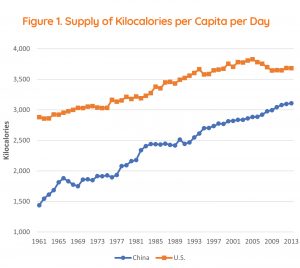 Furthermore, reports indicate around 70 percent of China’s pigs died during the Asian swine flu outbreak, and the country has not cut its output of poultry (which ramped up to fill the protein gap during the outbreak) as it has rebuilt its swine industry. This double whammy has led to record purchases of U.S. feed grains over the past year, and although the corn commitments have attracted most of the attention, the unspoken hero of the 2020/2021 marketing year has been sorghum basis. Figure 2 includes sorghum and corn prices on the Gulf of Mexico since late 2019. 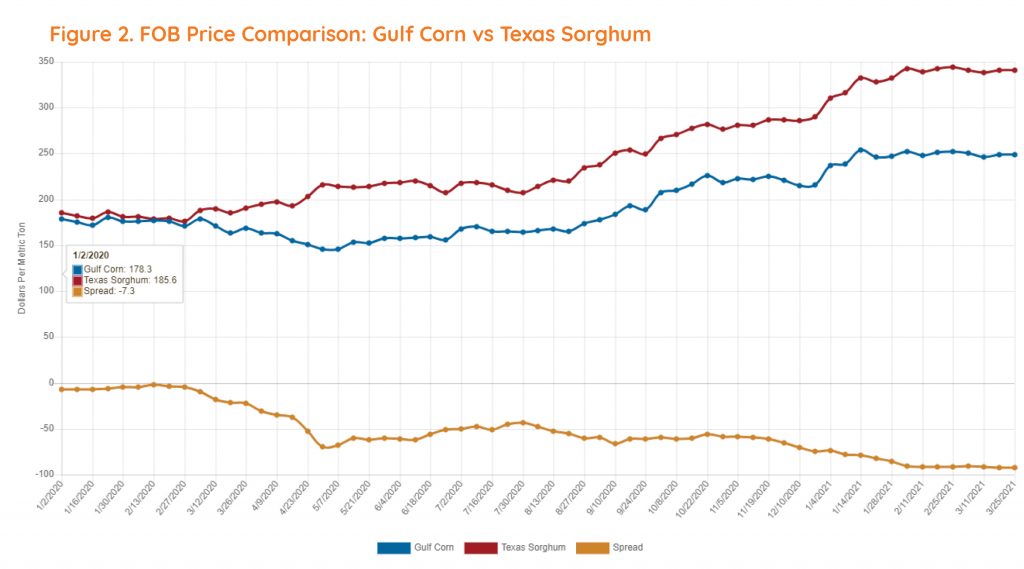 Note the virtual dead heat that prevailed prior to the Phase 1 trade deal with China taking effect on February 14, 2020. The next few weeks saw some of the largest purchase commitments in the history of the sorghum industry, and by summer, sorghum prices were running away. Today, the premium for sorghum to corn stands at $92.50 per metric ton or $2.35 per bushel. This 37 percent advantage is likely to drive the largest ever national average farm price premium for sorghum. USDA is currently projecting a 2020/2021 marketing year price of $5.00 per bushel for sorghum and $4.30 for corn, and the 2021/2022 marketing year is already presenting similarly strong opportunities as some interior locations are bidding $6.00 or less per bushel for new crop sorghum. Such aggressiveness is virtually unheard of among buyers of major row crop commodities in the U.S.

It is tempting to believe this price action is based on the requirements of the Phase 1 deal or speculation on future growth, but the data indicate otherwise. Confirming the reports of near-exponential demand growth (i.e., the double whammy), actual exports so far in the 2020/2021 marketing year are running second only to the 2014/2015 marketing year, or the largest year on record. Figure 3 illustrates this strength. 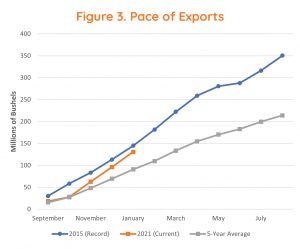 In 2015, the production increase resulting from these historic purchasing levels outstripped total demand, and the industry weathered a contraction as a result. This year, USDA’s March 31 prospective plantings report indicate U.S. sorghum farmers are planning a robust–but not excessive relative to the amount of demand–18 percent increase in acreage This restraint coupled with significant demand and aggressive purchasing are a good sign for sustained strength in the sorghum market as #Plant21 continues across the Sorghum Belt.