Increased acres, yields and exports have created a perfect storm for the sorghum industry. Acres are up this year, and the large majority of the Sorghum Belt is experiencing better than average yields with the 2021 crop.

Heath Heinrich sat in his combine on a sorghum field just north of Lubbock, Texas. As he moved up and down rows of dryland sorghum, listening as the grain began to fill up the tank behind his seat, he watched the pounds per acre gradually uptick on the screen.

“Why sorghum right now?” said Heinrich as he gestured to sorghum stalks moving through the header. “Well I like sorghum on any year, but this year it just really came together. We had timely rains and the price is right. Having above average yields with a price where it is, is phenomenal, and that’s what we’re experiencing right now.”

Increased acres, yields and exports have created a perfect storm for the sorghum industry. Acres are up this year, and the large majority of the Sorghum Belt is experiencing better than average yields with the 2021 crop. With an increasing supply, China continues to buy large quantities of sorghum, along with other countries stepping up to make purchases.

On Sep. 10, USDA released its monthly World Agri-culture Supply and Demand Estimate report increasing estimated planted grain sorghum acres to 7.3 million acres, a sharp uptick from 5.9 million acres last year. This is a 12 percent increase over the August report and a 24 percent increase from the previous year. 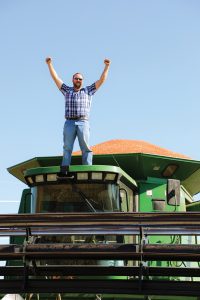 (HEATH HEINRICH celebrates a phenomenal yield on his dryland sorghum near Lubbock, Texas.)

“It’s clear the sorghum acres are up this year,” the Sorghum Checkoff Director of Agronomy said. “As you travel from the Texas Panhandle north up into Kansas, you can easily see there is more sorghum in the fields.”

This acreage increase comes after Chinese demand for sorghum was up significantly in the 2020/2021 marketing year, which ended Sept. 30. National Sorghum Producers Executive Vice President John Duff partially attributed a predicted jump in acres for the 2022 crop year to continued export demand, saying this past marketing year was the second largest in total exports to China that the U.S. sorghum industry has seen.

“We saw a lot of excitement about sorghum this year because of the market,” Duff said as he ran calculations on the most recent weekly sorghum export data. “China is back in a big, big way. They, of course, have been back in the market since the 2018 settlement of the anti-dumping and countervailing duty cases and when the U.S.-China Phase One trade agreement took effect in 2020. Our acres show that, and sorghum exports are up more than they have been in the past six years.”

While high prices and export demand certainly play a role in planting decisions for the next year, Heinrich said those are not the only factors that will likely lead to him keeping sorghum in his cropping rotation for the next planting season.

Heinrich said adding sorghum to his rotation allowed him to replenish organic matter in the soil on land where cotton has been grown for many years. Gesturing to a field of irrigated cotton just to the south of his dryland sorghum, he said he grew sorghum on it the summer before and wheat in the winter, which allowed him to build nutrients back in the soil and improve the quality of his summer cotton crop this year on a limited amount of irrigation.

Heinrich also said summer sorghum allows him to harvest earlier in the season than a cotton crop, giving him more time to get everything into good shape to transition into wheat in a timely manner.

While the market for most crops is good right now, Heinrich said the increasing prices for inputs, including fertilizer prices that more than doubled in the past year, will influence his plans for the next planting season, as well. He said if prices work out, he will likely keep sorghum and wheat in his rotation because the two crops do not require as much fertilizer or other chemicals as cotton or corn.

“The idea of a lower input crop this next year,” Heinrich said, “is more appealing to me than trying to swing for the moon on something when I have no idea what the input costs are going to be.”

“We’ve had some phenomenal yields [with sorghum],” Heinrich said, “and it’s at an amazing price. It’s an all-around win on sorghum this year.”