The sugarcane aphid, Melanaphis sacchari, was discovered late in the 2013 growing season in the coastal sorghum regions of Texas. Public and private crop protection partners have researched and learned a great deal about the pest over the last seven growing seasons, and today farmers are effectively managing the aphid. Occasionally, growers and consultants may refer to the sugarcane aphid as the ‘white aphid’ or ‘SCA’.

Diligence is key, and it is important for producers to scout fields and apply a recommended insecticide when the economic threshold is reached. Sugarcane aphids will only survive and multiply significantly in sorghum genotypes, including Johnsongrass, shattercane, sorghum-sudangrass, sudangrass, forage sorghum and grain sorghum. Sugarcane aphids will not survive on any of the major crops such as corn, cotton, soybeans or wheat. However, sugarcane aphids are distributed by the wind, so small colonies can be found in these crops, but at this time, they have not been found to be of economic importance. The sugarcane aphid that infests sorghum is a different biotype than the sugarcane aphid that is found in sugarcane but they look identical in appearance.

Where is the sugarcane aphid?

Help us track the aphid!

Defense Against the Sugarcane Aphid Booklet

Seed companies have now had multiple growing seasons to observe their hybrids and should have a good grasp of their tolerance level to sugarcane aphids. Growers in those regions where sugarcane aphid has been a reoccurring issue should visit with their seed company representative as well as seek advice from regional extension agronomists and entomologists when choosing hybrids.

Private companies and university sorghum breeders continue investigating tolerance and resistance. They have identified better sources of sugarcane aphid resistance and tolerance and these qualities are now incorporated into many commercially available hybrids.

Unlike grain sorghum, there are only a few forage sorghum hybrids that have sugarcane aphid tolerance. With the exception of these few, at best, all we can say is that certain hybrids are less susceptible than others. On a positive note, companies have been working to incorporate sugarcane aphid tolerance into their forage sorghum, particularly those used for silage. For example, Alta’s ADV F6520, from its EMPYR Premier Forages lineup, has been given the Aphix brand signaling Alta’s ‘best-in-class’ option for SCA tolerance. It is expected that more SCA tolerant silage sorghum hybrids will be introduced to the market over the next couple of years.

In sorghum silage, Texas A&M University research has shown yield can be reduced as much as 40 percent prior to sorghum flowering if a high infestation of SCA occurs and is left uncontrolled. Additionally, quality of the silage is reduced, primarily because of a reduction in starch due to lower grain production. Both silage yield and quality are affected much less if the SCA infestation occurs after the grain milk stage. However, late infestations can produce honey dew in sufficient quantities that could interfere with harvest.

Heavy infestations of the sugarcane aphid cause leaves to be covered with a sticky, shiny substance called honeydew. This honeydew is made up of plant sugars and water, which are harmless to animals. Honeydew is water soluble and could be washed off of the plant by rain or sprinkler irrigation.

Black sooty mold will often begin growing on the honeydew of sorghum leaves. This black sooty mold blocks out sunlight and decreases the plant’s ability to produce sugars through photosynthesis. Over time, black sooty mold causes leaves to turn yellow and eventually the leaf tissue dies.

Loss of plant sap from the sugarcane aphid feeding on sorghum leaves takes away nutrients from the plant that could otherwise be utilized for plant health and grain yield. Plant stress caused by the sugarcane aphids can also lead to uneven and lack of head emergence, poor grain set and will likely contribute to an increase in lodging.

Yield losses can be as much as 100% on susceptible grain sorghum hybrids left if heavy infestations of aphids occur early and are left untreated. Forage sorghum yield and quality can also be greatly reduced, especially if the sugarcane infestation occurs early prior to head emergence. 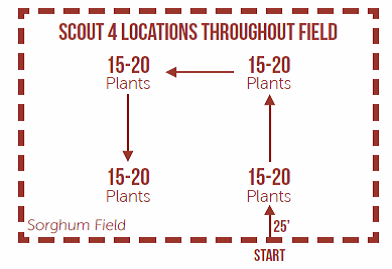 Threshold levels change and vary between regions. It is important to check with local experts to determine regional thresholds and scouting procedures. A simple rule of thumb is to treat when 25 percent of the plants are infested with 50 aphids per leaf.

In South and Central Texas, entomologists recommend a threshold of 50-125 sugarcane aphids per leaf. However, in other regions, most use a threshold ranging of 20-30 percent of the plants infested depending on sorghum growth stage. See the Kansas State sugarcane aphid table below:

See the links below for information on scouting and when to treat sugarcane aphids in Texas and Kansas:

Two herbicides, Sivanto Prime and Transform WG have proven to be effective products for controlling sugarcane aphid. In late 2020, Sefina received approval from EPA for use in sorghum. Sefina is an effective insecticide on sugarcane aphid, and has a different mode-of-action than Sivanto Prime and Transform. Growers are encouraged to rotate insecticides used to lower the risk of aphids developing resistance to the products.

Additionally, movement of Sivanto Prime, Transform and Sefina in the plant is minimal, making coverage essential for adequate control.

When other insects such as headworms and midge are present at threshold levels it is tempting to use one of the cheaper pyrethroids to control these insects. However, if sugarcane aphids are present in the field the use of pyrethroids may cause the aphids to quickly multiply due to the reduction in the beneficial population. Under these conditions consider using Prevathon, Blackhawk or other appropriate insecticides that maintain the beneficial insect population critical for keeping sugarcane aphid numbers in check.

When applying insecticides, it is important to read the full product label and follow instructions carefully. In general, ground rig application tends to work better than air application. Chemigation has also proven to be effective with Sivanto Prime. Insecticide coverage is critical for sugarcane aphid control. Use spray nozzles and a spray pressure that maximizes coverage. Increasing the volume of water above the minimum requirements listed on the insecticide labels is recommended. Control will be lessened if insecticide application is made under cool conditions, including temperatures into the low 60 degrees Fahrenheit. The duration of control will depend on many factors, but under heavy infestation levels, expect anywhere from 10 to 21 days of control. Continue to scout for a second infestation of aphids. Check with local experts on the use of adjuvants. Research on their effectiveness has been mixed and are already present in some insecticides.

Biological control along with tolerant hybrids is the key to long term management of sugarcane aphid in sorghum. Below are a set of videos by Kansas State University discussing key predators and how they interact with host plant resistance to control sugarcane aphids.

If sugarcane aphids are in significant numbers in the sorghum head or on the upper leaves, harvesting can be impeded due to honeydew. There is not a good threshold level at this time for when to spray sugarcane aphids to assist in harvest.

If sugarcane aphids are present and produce a significant amount of honeydew that can gum up the combine growers should consider applying the lowest labeled rate of insecticide to control the aphids. Check the pre-harvest interval as this can vary depending on the state and insecticide used.

A false assumption is that using a harvest-aid such as glyphosate will control sugarcane aphid prior to harvest. This is not the case, and may make the problem worse by causing the aphids to migrate from the dessicated leaves to the sorghum head. If a harvest-aid is used as sugarcane aphids are present in significant numbers, is it recommended that an insecticide be added to the application.

Below are seven videos that are part of our sugarcane aphid management series. In the videos, Sorghum Checkoff agronomist Brent Bean, Ph.D., summarizes the research findings into best management practices and next steps for growers.

When to Apply an Insecticide

Control When Other Pests are Present